Our trip to Colombia was almost thwarted by an Avianca check-in staff member. When we began the check-in process, the staff member checked me in first without any problem since I didn’t need a visa to travel to Colombia. When she started to check-in Jun, however, she was unaware of the requirements for a Chinese citizen to visit Colombia. Jun at that point knew more than she did. She knew Jun needed a visa, but when she started to read through the visa requirements for a Chinese citizen, she didn’t read through the entire entry before she started asking questions. She kept asking him about his European visa being expired and that he didn’t have the required visa to enter Colombia. Jun explained that he was going to use his United States visa to enter the country since Colombia allowed Chinese citizens to use either a European Union or United States visa in lieu of a Colombian visa to enter the country. Jun explained this fact to her, but she kept focusing on the European visa.

I asked her to show us what information she was reading, and noticed that there was more information; she needed to scroll down the screen to see it. When she did scroll down, the next entry was how Chinese citizens may use a visa from the United States to enter Colombia. While she should have read through the entire entry before informing us we had a problem, she was aware she had made a mistake and apologized. She then quickly finished our check-in and we were on our way.

We had an overnight flight and didn’t arrive in Bogotá until about 5:30 in the morning. Fortunately, the hotel we were staying at—the Hotel El Dorado Bogotá—sent a car and driver to meet us and quickly ushered us to the hotel. When we got there we did everything we needed to do to get to our room, take a shower, and go to sleep as expeditiously as we could. As soon as we did all that we slept until noon.

After waking up and getting ready, Jun and I made a plan to go to La Candelaria. We asked the staff the best way to go and they said either by Uber or by taxi. Since neither of our phones would allow us to get an Uber, we took a taxi. Taxis here are interesting; the cab fare is based on a meter that ticks your distance and/or wait time. You use a card with the rate chart printed on it to figure out how much you owe.

Our taxi driver was nice and got us to our destination. He told us how to walk to the Gold Museum—our first stop. When we got into the Gold Museum, Jun and I were amazed at the many different pieces the museum displayed from different time periods and locations throughout the country. The intricate nature of some of the designs were impressive based on the tools available to the crafters. The museum was beautifully designed and gave a wonderful introduction to one core aspect of Colombian culture.

From the museum we then walked towards Bolivar Square to find a place where we could eat. It was already late in the afternoon and Jun and I hadn’t had anything to eat since breakfast on the airplane. After walking around the square we ended up having an early dinner at La Paella de la Candelaria. The place was wonderful. The paella was delicious and the staff friendly. It was also the first time in Colombia that I had to remember a lot of my Spanish, which at that point I hadn’t used in eleven years. At some points in a conversation I forgot the Spanish word and wanted to use an Armenian or Chinese word in its place. Fortunately, I was able to muddle my way through.

After dinner we continued to explore La Candelaria until Jun and I were ready to go back to the hotel to catch up on our sleep. After trying to find a taxi, we found one and soon were on our way back to our hotel and to the comfortable bed there.

Jun and I really had been tired the day before and we slept in until around 11:00. By the time we were cleaned up and ready to start the day it was time for lunch. We decided to walk to the nearby Parque 93 area to find a place to eat. After a bit of searching we settled on a seafood restaurant—Pesquera Jaramillo—for lunch. They were quite generous with the seafood portions for each of our dishes. It was a delicious meal with wonderful service.

When we finished lunch, we took a taxi to the funicular station that would take us up to Cerro de Monserrate. We were lucky when we went as there were no lines and the funicular was about to leave. As soon as we hopped on, the doors closed and we were on our way up the mountain. The ride up offered a panoramic view of the city. As we got closer to the top we were soon surrounded by cloud cover from the rainy weather system that was in the region. As we got to the top we lost our view of the city, but we were still able to enjoy walking around the top with the abundance of flowers and the different buildings there. As we were going around the area, it started to rain. We then rested inside the Basílica Santuario del Señor de Monserrate until the rain let up a bit. It was nice to walk around the interior and take a moment for ourselves.

Soon the rain did let up and we were awarded with being able to see all around the city and surrounding mountains. Jun and I took a number of pictures. Soon it was getting busier at the top and we decided we were ready to go back down.

When we got to the bottom we decided to walk towards La Candelaria. We first went through the Universidad De Los Andes and were able to see a number of neat examples of street art. From there we then went straight to La Candelaria. 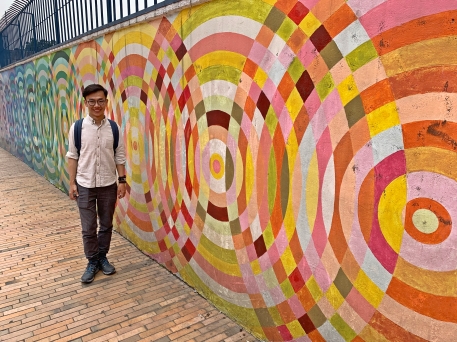 When we arrived we decided to visit the Botero Museum and the other museums in the complex that comprise the Banco de la República’s art collection. It was neat to see the works of Colombian artist Fernando Botero and other internationally famous artists. It was a great place to spend some time in the late afternoon. 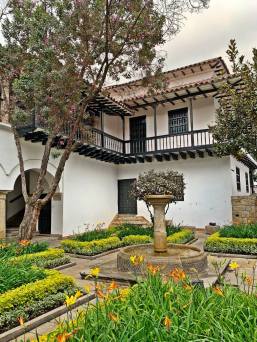 Afterwards Jun and I went back to Parque 93 to find a place for dinner. We ended up having dinner at Karen’s Pizza and had a delightful meal to end our day.

We had finally caught up on our sleep and work up at an earlier hour in the morning that allowed up to eat breakfast before we started our day. Jun and I decided that we would venture out of the city and go up north to explore that area. We hired a car and driver who took us, first, to see Laguna Guatavita near the town of Sesquilé. The lake is associated with the myth of El Dorado. While we didn’t see any gold at the lake, it was a nice hike around the portion of the lake we could get through. We also ended up visiting the lake with a school group. They were mostly a nice group, but they did take up a lot of space. 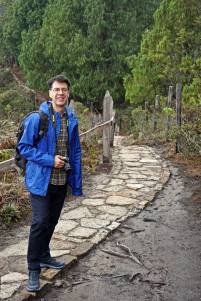 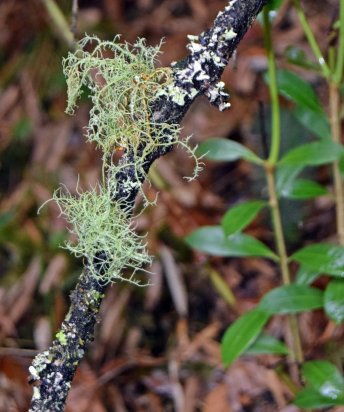 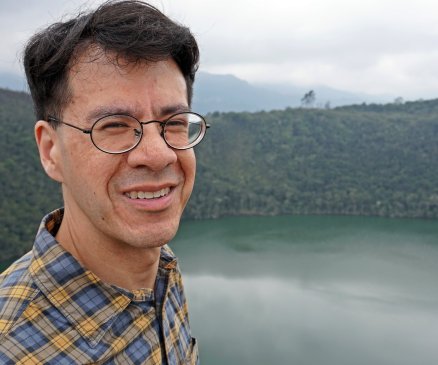 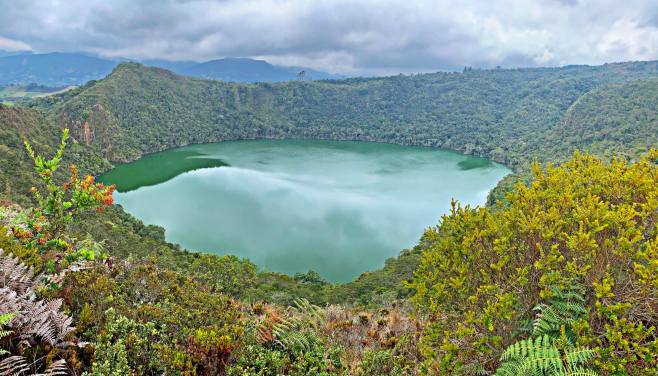 From the lake we then went to the town of Zipaquirá. We went there to visit the Catedral de Sal. The cathedral is built inside an old salt mine. As you go through the cathedral you pass through numerous stations on the way down to the three naves. It’s a really fascinating place. This is the second cathedral built at the side, the older one being above the newer one. The old one was deemed unsafe for visitors due to it being carved in an active mine, thus they built the newer one. While it’s a major tourist site for the region, it still functions as an active church with regular Sunday service. Jun and I definitely enjoyed our time here. 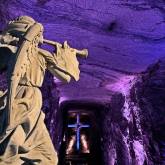 Soon it was time for us to get back to Bogotá. Before leaving Zipaquirá, we drove down to the central plaza and walked around it before we left. 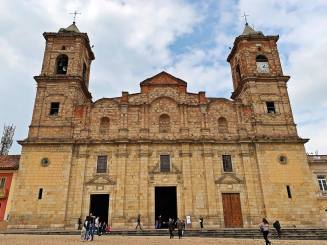 When we got back we decided to do a bit of shopping before dinner. We ended up buying some nice chocolates for my mom at Truffelinos-La Chocolateria. They had such a variety of chocolates to choose from that we splurged a little and bought a bigger box than we had anticipated. They were worth it though!

From there Jun and I walked to a restaurant he had wanted to try: Restaurante La Estancia Chica. Jun wanted to try some Colombian grilled food and we ordered some chorizo and steaks for dinner. We also ordered a pitcher of sangria. The sangria was the highlight of the meal. It was flavorful and the best sangria I’ve ever had.

After dinner we went back to the hotel to call it a night.

Today was a travel day. Our flight to Lima was later in the morning, so we took it easy before checking out and heading towards the airport. Our time in Bogotá was a nice, but we were ready for our next adventure.