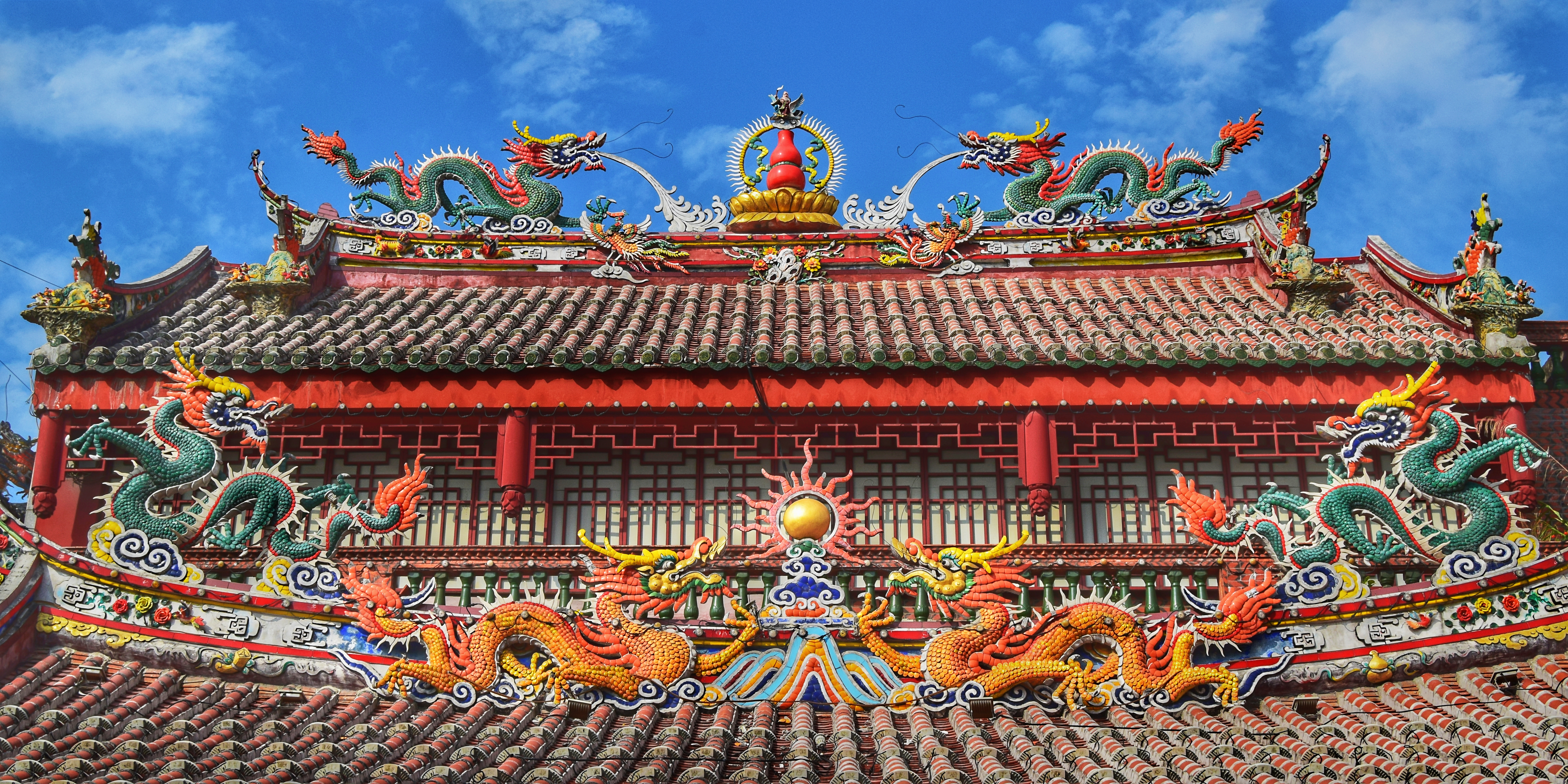 After going back and forth with the pros and cons of taking a trip during the Mid-Autumn Festival so close to the Chinese National Day holiday, Jun and I decided that we would take a trip. Since we waited pretty late to book this trip, we basically searched for a place where there were still train tickets available. After going through different possibilities, we settled on visiting Quanzhou in Fujian.

Our train to Quanzhou left late in the morning, so we were able to leisurely make our way to Shenzhen North Railway Station. After going through the formalities of ID checks and security, we were soon on the train and on our way to Quanzhou. The ride was nice and we soon found ourselves in Quanzhou and waiting for a cab to take us to our hotel—the Hilton Quanzhou Riverside.

The hotel was really nice. Jun and I spent some time freshening up before we ventured out to explore the city.

We first visited Kaiyuan Temple, which is the largest Buddhist temple complex in Quanzhou and the surrounding area. The gardens were nicely tended and complimented the temples structures. The two most impressive sights were the two pagodas that mark the southwestern and southeastern ends of the grounds. 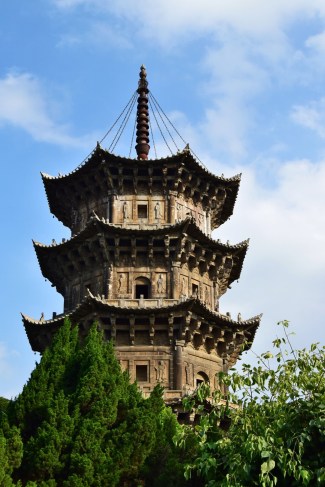 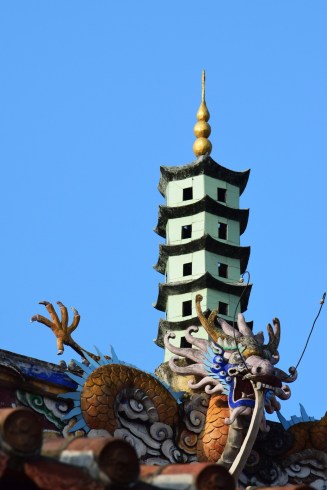 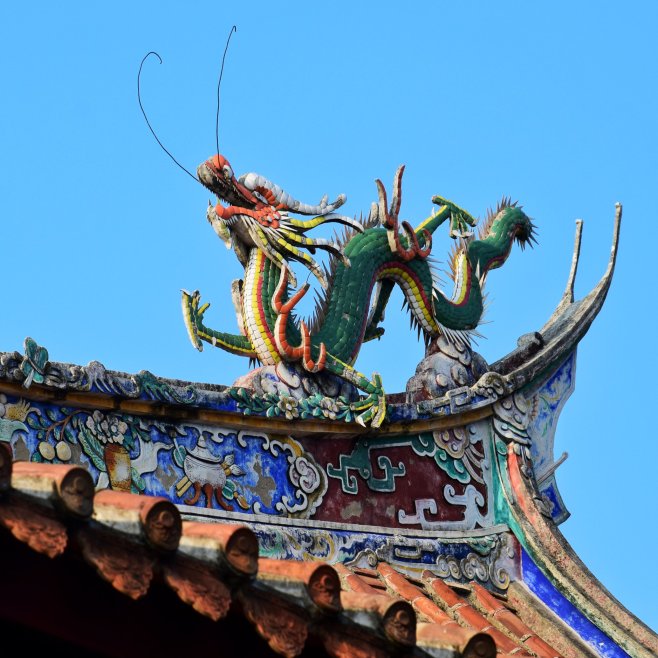 After we had explored the temple complex we walked along West Lane, which had a lot of different shops and food vendors. It was a bit chaotic with the number of pedestrians and scooters vying for space. It was a nice walk, and we found a number of stores where you could go up to the roof to get a view of the surrounding area. We found these nice carp magnets at one of these stores, appropriately named Gift of Carp, that we were happy to purchase for our home. 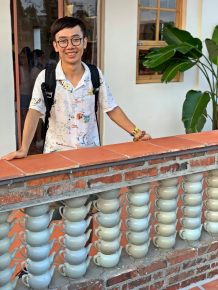 At the end of the lane was this strange traffic light tower. Apparently, it’s a bit of a known monument in the city as there are a lot of kitsch souvenir items in the local stores of it. But it did mark the end of the pedestrian area of West Lane. While there we also were able to see another street with historic shophouses that were being renovated. 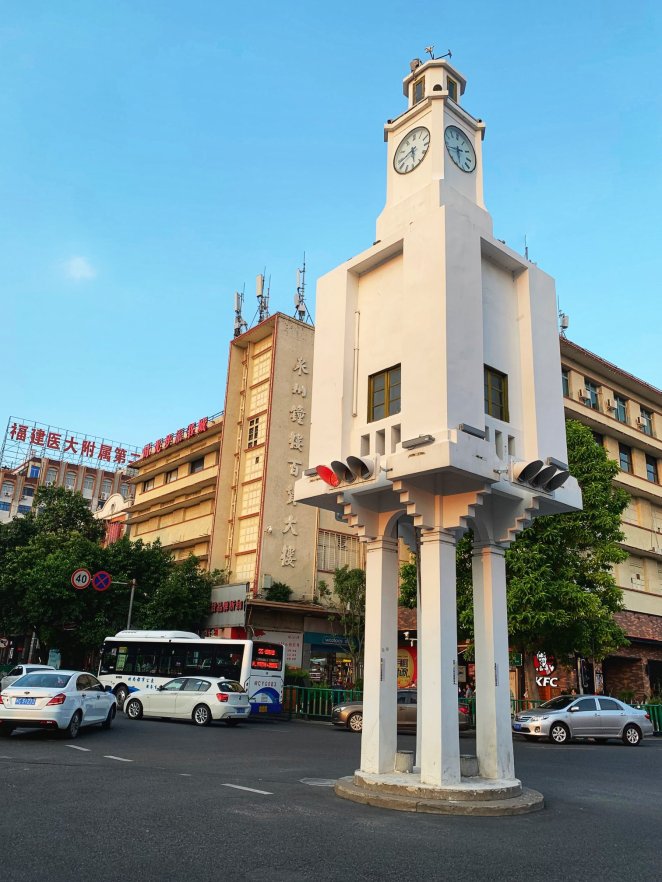 By that time it was early evening and Jun and I were starving. After consulting Jun’s food app, we decided to go to a local seafood restaurant—Ajing Meishi—for dinner. When we got there they didn’t have a small table available, so they set up a folding table at a corner for us. We were lucky we got there when we did and they were willing to do that for us since it got busy shortly after with people waiting for a table. The food was quite good; my favorite being a seafood noodle dish that had a nice creamy flavor to it. 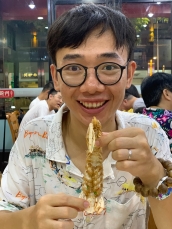 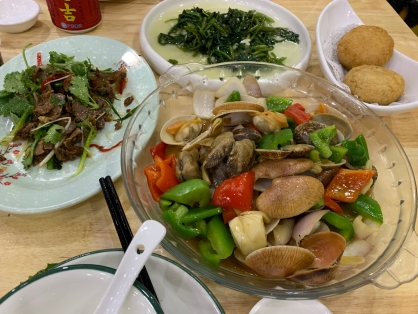 After dinner we went for a walk around the area before taking a Didi back to the hotel and calling it a night. So far Quanzhou had been a delight.

After a scrumptious breakfast at the hotel to start our day, Jun and I ventured off towards Qingyuan Mountain. We first started our trip there by admiring the statue of Laozi, the founder of Taoism. Then we started our hike up into the mountains. More so than in many other mountains in China, Qingyuan had a lot of hidden pavilions that you could visit. Some were behind rock outcrops, others were around mountain lakes. It was quite a joy to go around the mountain and see these hidden places. In the more remote areas there were hardly any other visitors. Near the end of hike we even ended up at a cemetery. 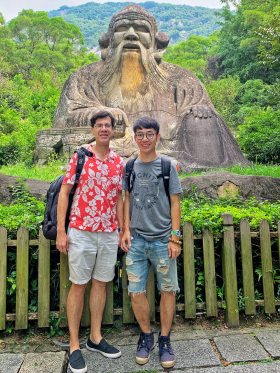 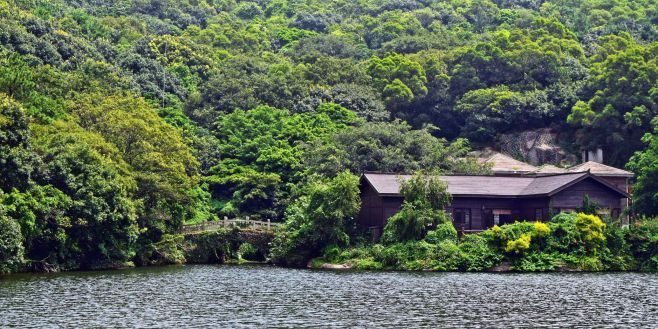 As the cemetery was the end of our stay at the mountain park, Jun and I then went to the Southern Shaolin Temple in Quanzhou. The Shaolin Temple in Henan is one of the great centers of kung fu in the world. Tradition has it that during one of the warring periods in China, many Shaolin monks traveled south to the Quanzhou area to establish the southern temple. While the historic temples were destroyed, they are being rebuilt and opened to students to learn kung fu. The structures that are already built are quite impressive and were a delight to walk around. 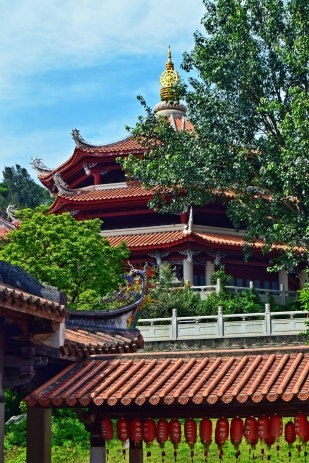 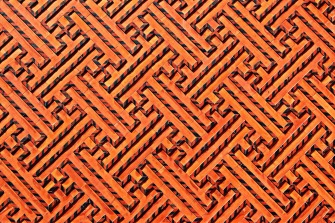 Afterwards, Jun and I went back to the historic area to walk around the old town. We first went to visit the historic Qingjing Mosque. It’s the only surviving mosque in the city. It’s roughly a thousand years old. Since Quanzhou was the historic terminus of the Maritime Silk Road, many traders had called the port home. These traders, to build a sense of community in Quanzhou, constructed community centers, such as religious structures, in the city. Where there had been once numerous mosques in the city, Qingjing is the only remaining one. On the grounds of the mosque are the remains of the original structure, as well as the newer version. 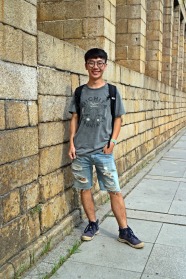 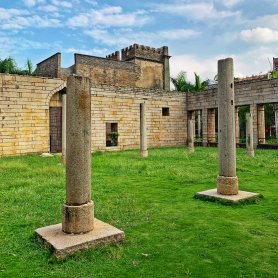 From there we walked a bit and saw a number of other Taoist, Confucius, and Buddhist temples in the city. Jun went to a local dessert place for a snack. I tried one of the desserts, but it wasn’t to my taste. Jun liked it though. From there we continued our walk and ended up going around the city’s West Lake.

To end our day we had a wonderful dinner at Lin Jia Min Nan Cai. The food was quite good and we ended up having his wonderful walnut milk with dinner. It had a nice flavor to it. It complimented our meal quite well.

With us delightfully happy from a tasty dinner, Jun and I went back to the hotel to call it a night.

Our last day in Quanzhou started with a leisurely morning before we went to the train station to get back home. Everything went relatively smoothly and we were soon back in Shenzhen. Before going back to our apartment, I had to drop off a document at work. While there we stopped at a colorful and nice exhibit—“A Thousand Rainbows”—by the artist Xiong Wenyun. Visiting the exhibit was delightful way to end our weekend excursion. 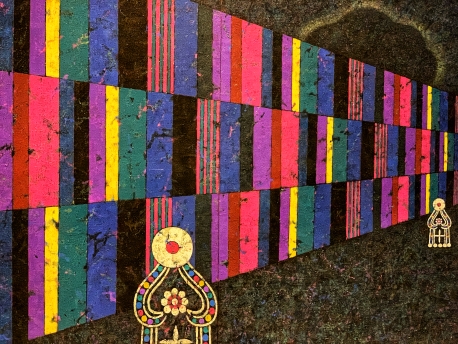 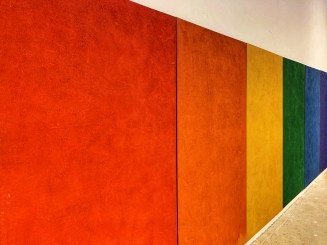 For the rest of the day we relaxed at home and got ready for another week of work. Quanzhou was a nice diversion from the everyday and a great place to spend a long weekend.