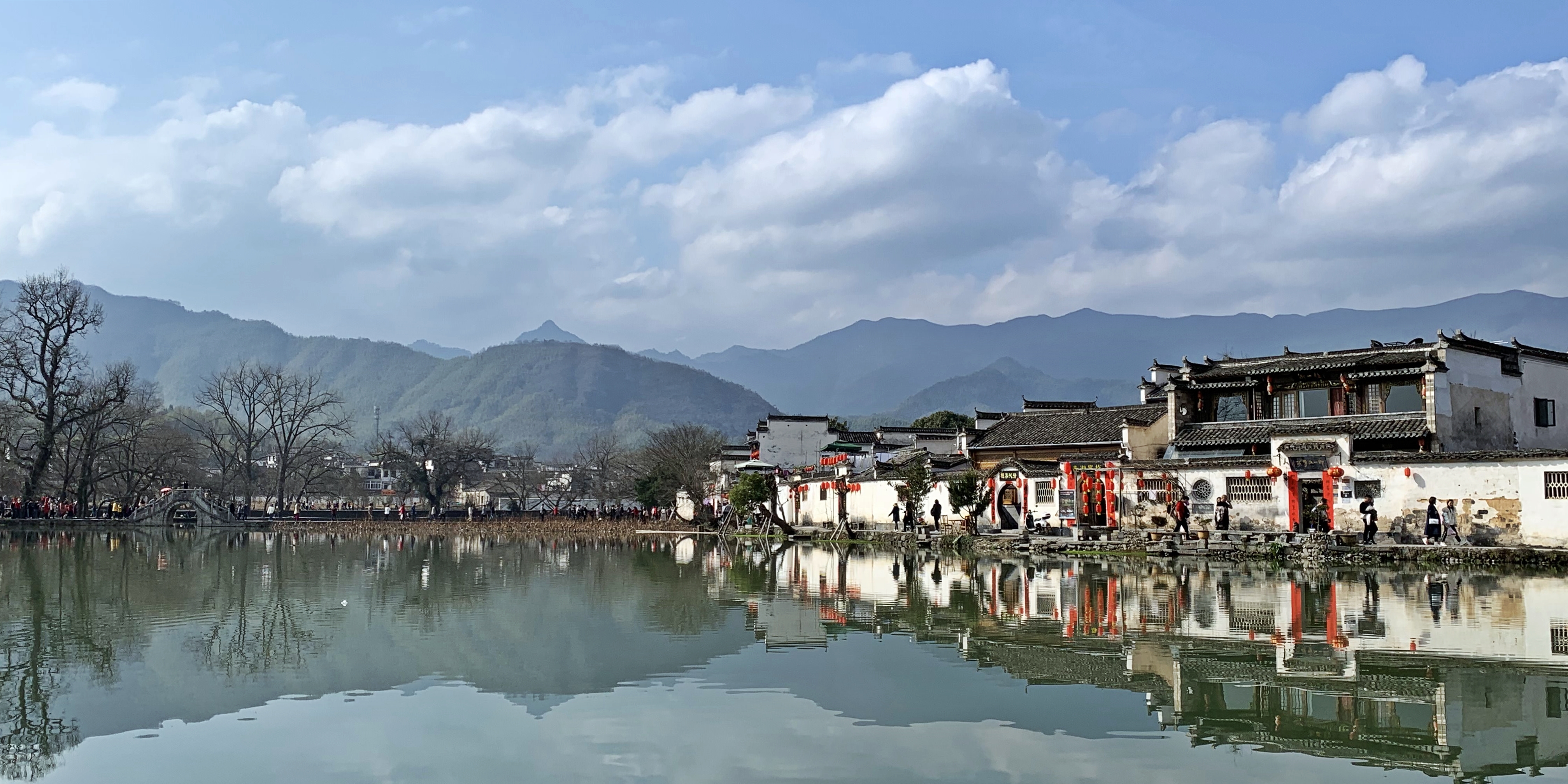 Lunar New Year arrived at the beginning of February. After discussing possibilities, Jun voiced his desire to return to Dexing to spend the holiday with his dad and stepmom. Since it had been awhile since we visited, we thought it was a great time to go there.

By the time we had come to that decision, the options to getting to Dexing during the holiday became limited and expensive. It ended up that to get there we would have to fly from the airport in the city next to Shenzhen and then take a shared car to Jun’s hometown.

The start of our holiday began on a Friday when we had to take the bus from Shenzhen to Huizhou. Since we had an early flight the next morning, we decided to go the day before and spend the night there. Once we settled into our hotel, it was time for dinner. Jun and I ended up going to a nice Cantonese restaurant that overlooked Huizhou’s West Lake. After dinner we decided to take a stroll around the lake. As it was the holiday we discovered that there was a free lantern festival going on around the lake. We decided to see what it was like. It was quite impressive. And the abundance of people who were there with us thought so too. 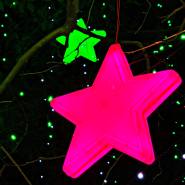 Once we had walked around the lantern festival, we headed back to the hotel and called it an early night so we could wake up early for our flight.

We woke up early the next morning and took a taxi to the airport. We got there just as the check-in counters for our flight opened and we were soon in the waiting area for our flight. The airport was tiny and everything went quickly. We were soon in the air to Shangrao in Jiangxi Province. We actually got there almost an hour early. Jun’s stepmom had found a shared car for us to take to Dexing, but it wasn’t supposed to leave for another hour. Jun and I ended up spending that hour in the airport. Once the car arrived we were soon on our way to Dexing. 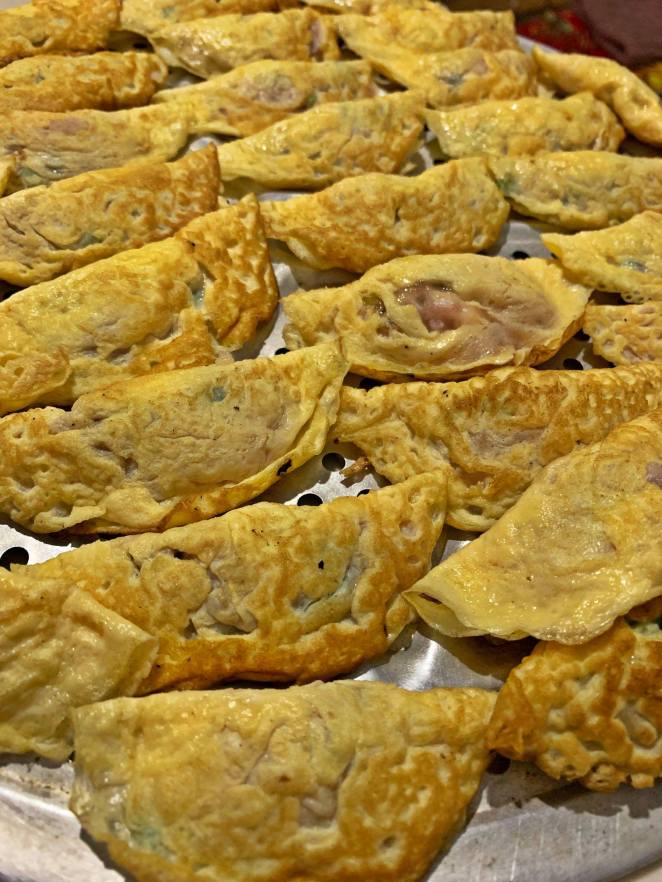 Once we arrived we met with Jun’s stepmom who made us lunch; we then went and took a nap. Later that day we walked around the city a bit before having dinner with Jun’s family. After dinner we went for a walk around the city and then called it an early night.

The time spent in Dexing was mainly a time to relax and for Jun to spend time with his family. I took the time to relax and catch up on my reading. We would go for walks around the city and try different foods there. As I was reading Leah Franqui’s America For Beginners, I began to crave Indian food. Jun “kindly” told me that I was out of luck in Dexing and would have to wait until we got back to Shenzhen.

On this day we took a trip to Phoenix Lake. It was a nice walk around the area and a great place to enjoy the warm weather. After spending a few hours there we went back to have dinner—typical Jiangxi cuisine—and a relaxing evening. 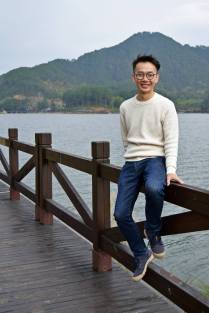 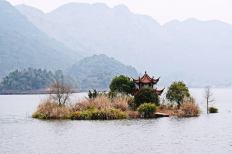 New Year’s Eve! Today was spent mainly in preparation for the holiday. Jun and I put up the Chun Lian in front of the door to express the family’s good wishes for the new year. Afterwards we just ate and relaxed for the day.

In the evening we had a wonderful meal and spent a nice time enjoying being together.

A rainy day in Dexing, as well as our last one. Jun and I just spent the day inside. After dinner Jun, his dad, stepmom, a friend of Jun’s dad, and I went up to Juyuan Tower. After the rain it was magically foggy. The area around the tower felt separated from the rest of the world and it was fun to be there.

After going around the tower and enjoying the views from there we went back and called it a night.

It was our last day in Dexing. Jun and I had decided to spend the second part of the holiday in southeastern Anhui to explore some villages there and to go up Huangshan. We first had to take a bus from the city to the Dexing train station, which wasn’t actually in the city itself. It really wasn’t even on the outskirts of the city either. It felt as if it was in the middle of nowhere. When we go there we arrived in time to take the high-speed train to Huangshan city. From there we had to take a bus to get to Hongcun.

When we got there we quickly got our tickets to get into the village and then went straight to our hotel.

Hongcun is a UNESCO World Heritage Site. It’s considered to be a fine example of village architecture from the Ming and Qing Dynasties. The village is arranged in the shape of an ox if you look at it from an aerial view. The village was even used in scenes from the movie Crouching Tiger, Hidden Dragon. 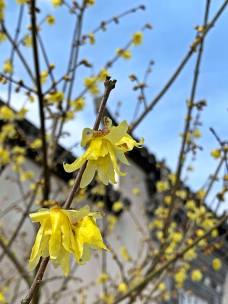 We spent the day going around the village and enjoying the environment. Late in the afternoon we took a walk towards another village—Lucun—that was smaller than Hongcun but equally interesting. There were some beautiful areas of this village.

Once we had returned to Hongcun, Jun and I went in search of dinner and had some noodles at a small restaurant next to Moon Pond.

After dinner we went back to the hotel and went to bed.

On this day we went to another UNESCO village: Xidi. Xidi is smaller than Hongcun. Established in the Song Dynasty, Xidi as a site is managed by the village itself. As such it is much less commercialized than Hongcun, which we were told was managed by a Beijing company. Jun and I agreed that while Hongcun was nice, Xidi felt more authentic. When we got there we first went to a wonderful family owned restaurant that had some really nice food. Once we were full we went and journeyed around the village. 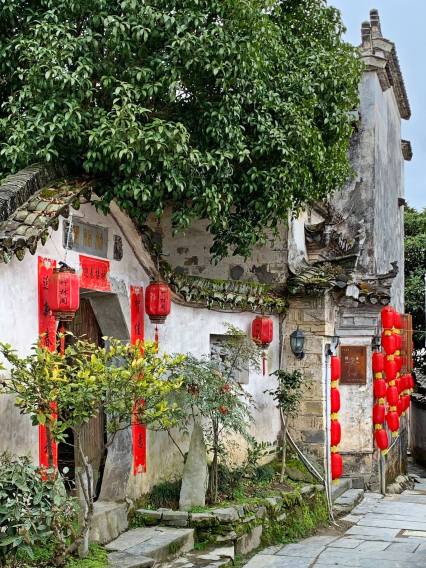 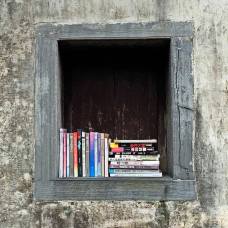 There were different houses and temples to explore, as well as farm fields to enjoy. In the late afternoon we found a nice café to have some hot chocolate and waffle cakes and relaxed. 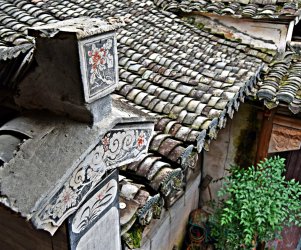 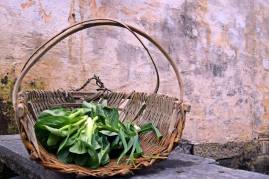 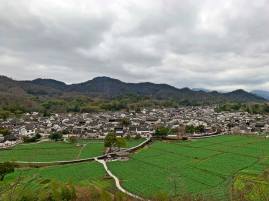 Soon our time in Xidi came to an end and we went back to Hongcun for the night. The next day Jun and I had to get up early for our trip to Huangshan. Before calling it a day we went to this nice restaurant—Guanlaotai—where I finally got to try stinky tofu. I ended up enjoying it a lot.

The day we went up to Huangshan. It started at 4:00 in the morning so we could get to the entrance gate of the mountain at 6:00 when it opened. It was an early start; we did avoid having to wait in standstill lines. We still had to wait in lines, but they were constantly moving so it didn’t feel as if we weren’t getting anywhere.

Huangshan is another UNESCO site. Huangshan—Yellow Mountains—are well known in China. They are famous throughout the country for their natural beauty. Many renowned Chinese paintings and texts have been inspired from these mountains.

Unfortunately, when we arrived it was a terribly foggy day. Our ability to enjoy the natural beauty was limited by the visibility afforded to us through the fog. Still, the fog added an ethereal feel to the place and we were able to experience parts of the different areas of Huangshan to ourselves. There were occasional moments when we got to see some beautiful sights as the clouds moved around the mountain peaks. 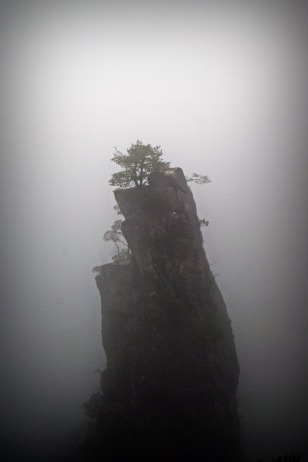 By early afternoon Jun and I were ready to go back to Hongcun and just relax for the remainder of the day. We spent a wonderful time at Zenlotus; we had some nice green tea and an amazing chocolate waffle with cream for afternoon tea.

The rest of the day we went around and did some shopping and just enjoyed being together.

The last day of the trip. Our flight to Shenzhen didn’t leave until 11:00 in the evening, so we had an entire day to get to the airport in Huangshan city.

Since we had an early morning the previous day, we decided to have a late morning on this day. When we finally were ready to start the day it was near noon. We first went for a hike around Leigang Mountain at the northernmost part of the village before having lunch at a really nice restaurant near Chengzhi Hall.

After lunch we went for a long, winding walk back to the hotel to collect our luggage before heading to catch the bus to Huangshan city.

The bus ride was uneventful and we were soon in the Tunxi District of Huangshan. We decided that we would go to see Laojie before heading to the airport. The old street itself was quite interesting with different types of stores that sold different snack foods, handicrafts, and jewelry. It was a nice way to spend the afternoon. 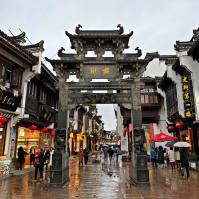 By early evening we had dinner at a dumpling restaurant. Then we took a taxi to the airport. We had to wait a few hours to check-in for our flight. And even when we did our flight was delayed a bit. We finally arrived back at our apartment in Shenzhen at 3:00 in the morning. And a few, short hours later I went back to work exhausted and ready for another vacation!

Overall, it was a great time getting to spend time with Jun’s family in Dexing and to explore a new part of China that I hadn’t been to before. It was a rather successful holiday! And I did end up having Indian food the following Saturday.